The Nigerian National Petroleum Corporation (NNPC) and the Kingdom of Morocco have pledged to deliver on the gas pipeline bilateral agreement between Nigeria and the North African nation in record time.

Also the quest by the NNPC to increase Nigeria’s daily oil production to three million barrels per day has received a major boost with the signing of a $3.15 billion Financing and Technical Services Agreement (FTSA) between Sterling Oil Exploration and Energy Production Company Limited (SEEPCO) and the exploration and production arm of NNPC, the Nigerian Petroleum Development Company (NPDC), for the development of Oil Mining Lease (OML) 13.

Morocco’s King Mohammed VI had in December 2016 visited Nigeria, while in June 2018, President Muhammadu Buhari reciprocated the gesture, during which both leaders signed some Memoranda of Understanding (MoUs) on the project.
The agreements include a Pipeline Cooperation Agreement (PCA) for the Nigeria-Morocco Gas Pipeline; an MoU to develop a chemical plant in Nigeria for production of ammonia and its derivatives and thirdly, an agricultural cooperation agreement on vocational training and technical supervision.

The PCA will facilitate the establishment of a gas pipeline to supply feedstock gas from Nigeria to Morocco, across the West African sub-region and all the way to Europe.
Speaking on the development, Kyari told the ambassador that the NNPC was fully aligned with the terms of the MoU and committed to delivering them on time for the benefit of their respective citizens.
He told Tagma that key among the crux of Buhari’s foreign relations was to widen cooperation among African states and expand the economic corridors of the continent.

“This is very important towards job creation, economic prosperity and ultimately, the achievement of overall peace and stability across the entire African continent,” Kyari added.
Kyari, who described Nigeria’s historical relationship with Morocco as dating back to a thousand years, said the two countries would continue to work together to further harness the huge gas resources abundant in Nigeria.

“Unknown to many people, Nigeria is more of a gas province than oil. We have billions of untapped gas resources. I am optimistic that our bilateral cooperation around the gas pipeline with Morocco will boost the economies of all countries across the West African states and up to Morocco,” he added.

Earlier, Tagma had congratulated Kyari on his recent appointment and wished him success during his tenure.
He described Morocco and Nigeria as “two important African countries” that can achieve a lot while working together towards developing their respective economies and creating jobs for their citizens.

Meanwhile, the quest by the NNPC to increase the country’s daily oil production to three million barrels per day has received a major boost with the signing of a $3.15 billion Financing and Technical Services Agreement (FTSA) between Sterling Oil Exploration and Energy Production Company Limited (SEEPCO) and the exploration and production arm of NNPC, the Nigerian Petroleum Development Company (NPDC), for the development of Oil Mining Lease (OML) 13.

OML 13 is 100 per cent owned by the NPDC and is located in the eastern axis of the Niger Delta covering a total area of 1987km².
A statement yesterday by NNPC Group General Manager, Group Public Affairs Division, Mr. Ndu Ughamadu, quoted Kyari as describing the funding arrangement as “a game changer to oil and gas project financing in Nigeria”.

Kyari, who was represented by the corporation’s Chief Operating Officer (COO), Upstream, Mr. Roland Ewubare, thanked the president for approving the transaction, adding that OML 13 held strong potentials both for the petroleum industry and the nation’s economy.
He said the federal government was expected to earn over $10.2 billion in royalties and taxes from the project over the next 15 years, while NNPC would earn over $5 billion after payment of the entire financing obligation.

According to Kyari, the acreage boasts of over 926 million stock tank barrels (mmstb) and 5.24 trillion cubic feet (tcf) respectively of oil and gas reserves, adding that the Financing and Technical Services Agreement is for a period of 15 years, the $3.15 billion ceiling funding would be provided by SEEPCO with a 10-year capital investment period and five years for cost recovery.
First oil of about 7,900 barrels per day is expected from the project by April 1, 2020, while production is expected to peak at 94,000bpd and 542mmscfd within four years.

On local content, the project is expected to enhance participation by indigenous companies in the industry by providing over 2,000 direct and indirect job opportunities.
Chairman of Sterling Oil Exploration and Energy Production Company Limited, Mr. Tony Chukwueke, expressed delight at the opportunity offered the company to support the production and reserves growth aspiration of the federal government. 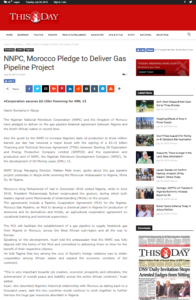